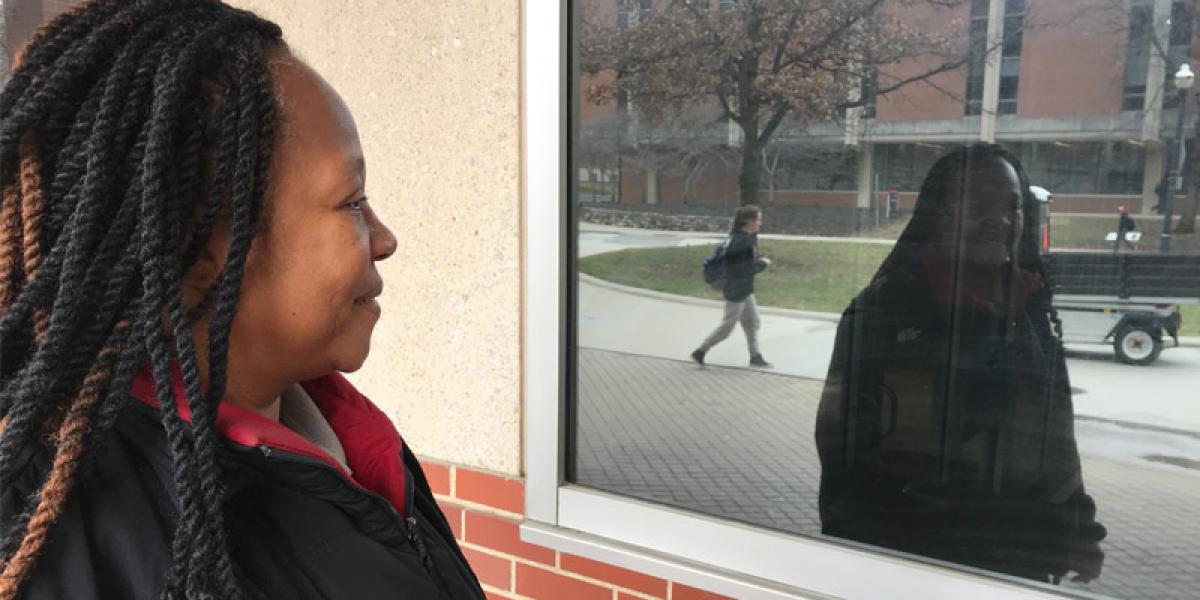 Lucille Talbert puckers her lips and shakes her head thinking about the way her body appeared in early 2015.

Lucy, as her coworkers call her, works as a first-shift custodian, looking after Derby Hall right off The Oval. Each day when reporting to and from work, Lucy travels past the Baker Systems Engineering Building and Dreese Hall. Both buildings have reflective windows that never fail to give her a full view of her body.

“I began to look at myself and said I’m gaining too much weight. What is going on?”

Carrying extra weight wasn’t normal to Lucy. She always considered herself to be an active person, but fell into a trap of lazy and unhealthy habits.

“I was eating fast food, chips and sweets. I would go to restaurants for breakfast, lunch and dinner if I didn’t feel like cooking.”

The weight gain impacted the way Lucy felt emotionally and physically. Her doctor even had her on medication to lower her blood pressure.

“Going up steps at Derby, I was tired and out of breath. I knew this had to be a stopping point right there. I said to myself this isn’t me, this is not who I am. I took control and made a change and I knew I had to do it for myself.”

The change first began during her 30-minute lunch breaks, walking two laps around the The Oval. As that task got easier, she added loops during her 9 a.m. break and then during her 1 p.m. break as well. Within three months, she was down 13 pounds.

Lucy was far from satisfied, joining Victory Fitness in early 2016. In addition to walks around The Oval, she would walk on a treadmill at the gym. When that became easier, Lucy was introduced to the elliptical machine.

“The elliptical beat me up. I couldn’t do it and I would get discouraged, but I kept pressing my way, saying this machine isn’t going to beat me. I started with 10-minute segments, and it grew.”

Now the piece of equipment is under her control, as Lucy regularly completes hour-long workouts on the elliptical. She also discovered Zumba, kickboxing and step-dance classes offered by the gym and started participating every Saturday morning.

“The weight started to fall off faster because I was more active.”

Now a member of the RPAC, Lucy has incorporated weights into her routine. She also has taken advantage of the university’s Your Plan for Health program, taking Zumba classes in her building’s break room.

Lucy has authority over her physical activity, but also has control of what she’s consuming. She first eliminated pork and beef from her diet, and now she doesn’t eat any meat at all. She considers herself a vegetarian, gaining protein from other sources. Her days start off with a smoothie and then she satisfies her hunger with salads, fruits and cooked vegetables for lunch and dinner. One of the most important parts to her routine is eating dinner at work before leaving to head home.

“When people get off work and sit in front of the TV, many of them are constantly going to the refrigerator or going to fast food restaurants. They’re eating late, and the weight piles on. If I eat early, I’m not hungry when I get home and avoid the urge.”

As the mother of two sons, Lucy still cooks meat, but some of her healthy habits have even rubbed off on them.

“My 14-year-old used to not like avocado, but he’s loving it now. They love when I put greens in the crockpot and now they’re getting more into beans. Seeing them eat this, I’m like yes! I love this.”

Lucy also is loving the way she looks. She’s down 55 pounds from where she started in 2015, and she’s hoping to shed at least 30 more.

“In the past, I didn’t have energy. I felt very heavy. Now, I can outwalk my kids. They’re saying ‘hold up, wait!’ I tell them you’ve got to get in shape.”

Lucy’s doctor even took her off the medication because of the effectiveness of her diet and exercise.

Now when Lucy sees her reflection in the windows of the Baker Engineering Building and Dreese Hall, she smiles with pride and excitement. The pride comes from the progress she’s made on her journey to health and excitement for what’s yet to come.

“You have to believe in yourself. Some people say this is just who I am, it’s not. You can do it, just like I can.”

Visit yp4h.osu.edu to learn more about the university's Your Plan for Health program. You can also register to win a fitness tracker.