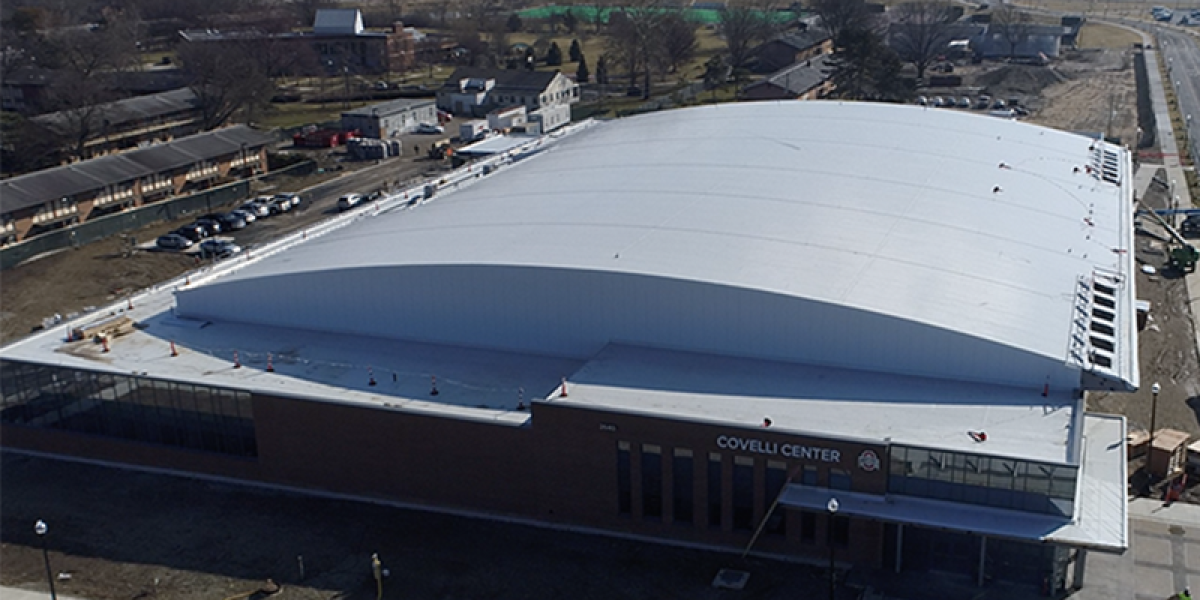 The 100,000+ sq.ft. facility has a competition area with a capacity of 3,700, as well as locker rooms, training areas, offices and treatment rooms. It will house Ohio State’s volleyball, gymnastics, fencing and wrestling programs. In addition, it will serve as an occasional venue for women’s basketball and the host site for local tournaments and camps.

Ohio State offered media members a tour Monday, although the facilities were opened to the coaches and student athletes about two weeks ago.

“When you walk into a place like Covelli, it’s really easy — almost impossible not to be — grateful,” women’s volleyball coach Geoff Carlston said. “For us, we couldn’t be more excited to be able to get in here and play in front of thousands of people come fall ... you walk into here — no one’s seen something like this, really.”

Carlston, who just completed his 11th season at the helm of the squad, emphasized the implications that the construction of such a facility has on his program.

“It’s humbling. It’s also inspiring, and the expectations are there,” he said.

Carlston’s sentiments were echoed by wrestling coach Tom Ryan, who has led the program since the 2006-2007 season, collecting a national title and three first-place finishes in the Big Ten along the way.

“I’m incredibly grateful,” Ryan said. “There’s a lot of young men that wrestle and learn things that are priceless, and a lot of these guys that have come here.... Often, they’re from a school that the wrestling room was the music room. And you push the piano to the side and you roll out some mats and you have practice.... I think they’re humbled by this, and they’re excited to make this place the most unique home venue in the world.”

From a different angle, men’s volleyball coach Kevin Burch will be moving into the new facilities during his first year at the top of his program.

A two-year assistant coach who was promoted after the retirement of Buckeyes legend Pete Hanson, Burch is thrilled by the opportunities presented by a state-of-the-art facility.

“This is the first facility I’ve ever seen that has four separate net systems,” Burch said. “It’s the first one I’ve seen that has 30 feet at the end of the practice courts. That’s really big — it can shape the way we play.”

All three coaches emphasized how such facilities can foster growth within their already elite-level programs.

“To go from good facilities at St. John and French [Field House] to the best in the country is a pretty exciting feeling for these guys,” Burch said, “and it’s something that I’m confident will stay with them the rest of this year — but something we definitely want to build off of.”

Added Ryan: "We have what our student athletes need to obtain the things that they deeply want."